>I made this post yesterday, and its disappeared? I will try to write it again similar..

I’ve been working on the panels for the doors, that are going on the Ash wardrobes for the last couple of days. They are having a large field applied to them, I was going to make a jig for them to ride through my thicknesser. But as it turned out they have ended up 40mm wider than my thicknesser can handle. I decided I would make a jig for the router to do them instead.

Glued the panels up a couple of nights ago.. 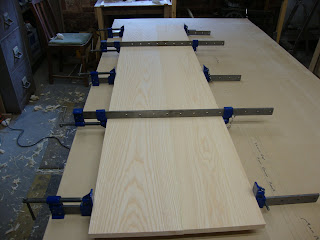 Planed the backs because after they have been fielded it will be difficult, then left them cramped up overnight to minimise movement. 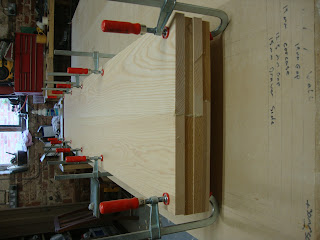 Then set about making the jig, its a piece of mdf the same size as the panel, with two bearers for the router to ride on, set a bit higher than the panel. There is also a wedge one end to give me the required angle, in this case 1 degree. 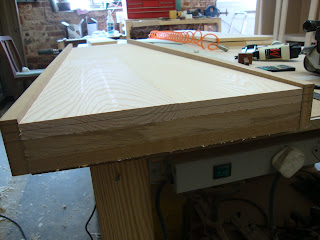 You can just make out the the angle. 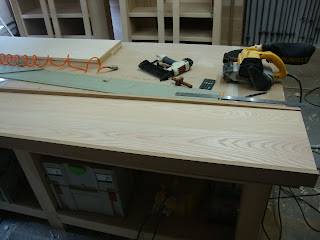 I need something substantial with no flex for the router to ride upon, I settled on a piece of 8×2 with a hole drilled in the middle. I have also fitted a collet extension to the router. 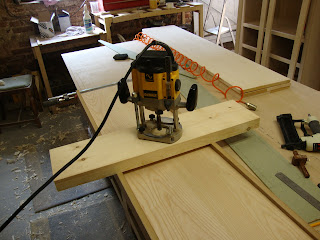 This needs a couple of batons attached to act as stops, so the router doesn’t eat into the side bearers. 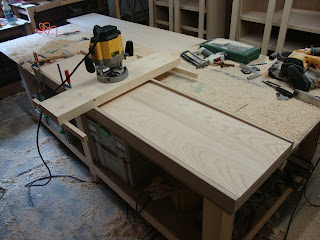 After I did the length I repositioned the panel in the jig to do the width. 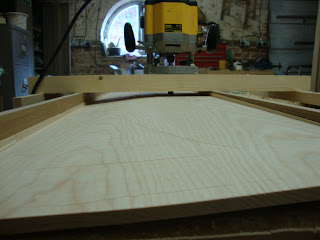 Short video of the CNC router in action.
Sorry about the jerky camera work at the end, if anyone knows of a FREE idiot proof video editor let me know.
And everything would of been fine if I’d just planed these up and called them done, however hindsight is a wonderful thing, and I should of looked at today’s date. I decided that the field wasn’t showing enough so thought I would alter the angle to give myself a more of a pronounced field….However taking a couple of mils off proved far from sensible, when this happened… 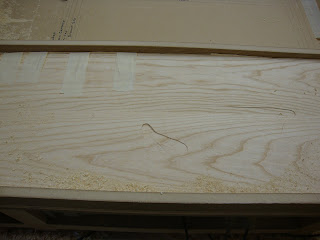 And a nice close up of the damage. 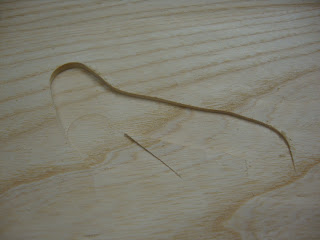 The last panel to do as well, it just wasn’t seated enough on the jig by about 5mm. I’ve managed to rip one half of the panel away and replace, its glued up ready for the morning(couldn’t face it tonight).
Thanks for looking, have a good weekend:-)