I’ve had a fairly good play with the carvex to form an opinion now, and this will be my review.

First off let me tell you that it comes in a sys 1, and what you get in the box. The carvex itself and the cord, you get the dust extraction tube that clips into the base, and the interchangeable bases when you buy the set. A couple of blades to get you started, and a couple of zero tolerance inserts. 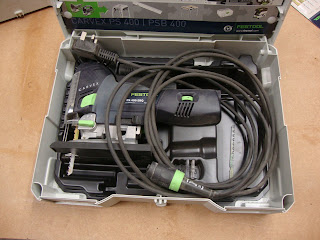 The extraction tube simply pushes into the back of the base plate. 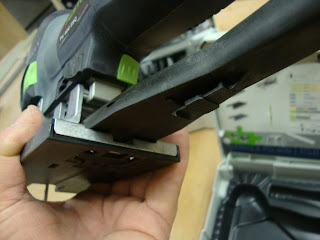 It then seats/clips into the back of the base plate. 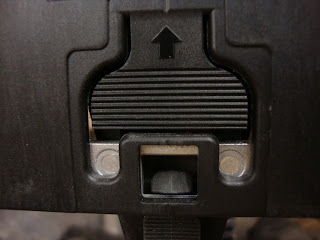 If you want to change to the guide rail base or the mitre base, you need to unclip the basic base that comes with the tool and push this lever forward. 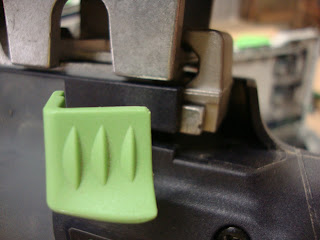 This in-turn pushes the hooked baseplate holder back and releases the base for a change-over, then reverse to get the base locked in. There is no play in mine whatsoever incidentally, so they have sorted that small problem that was doing the round on the forums.

Shot of the baseless unit ready for the selection of bases that come with the set. 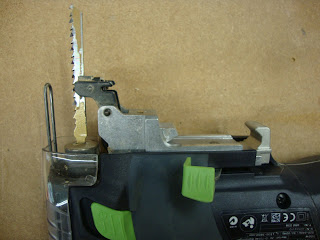 Moving onto the set this comes in a sys 2 and contains 4 interchangeable baseplates that clip onto the standard baseplate that comes with the tool. The circle cutting add on,which clips into the guide rail baseplate. The guide rail plate, and the mitre plate. There are five of the felt sheets for the StickFix plate for working on finished work, and four zero tolerance inserts. It also comes with a mystery key-chain that looks like it should do something, but I can find no mention of it in the instructions. 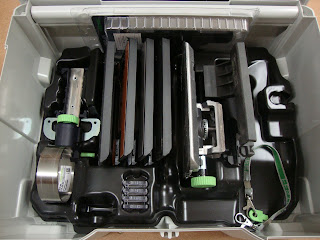 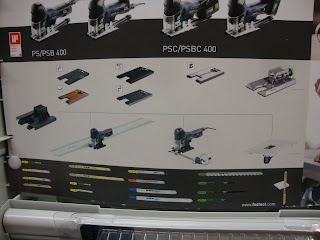 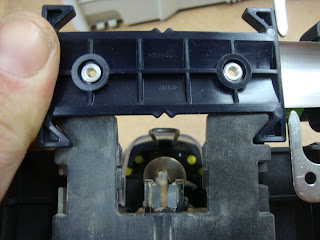 The mitre baseplate can also be used for cutting all manner of odd shaped materials. 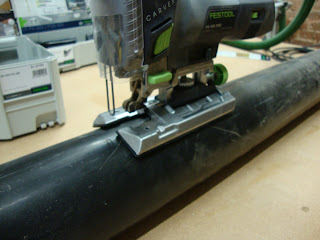 In this video you can see a bit of play in the guide rail plate, I think it could benefit from a couple of cam’s that are present on the base plate of the track saws.

The pin for the circle cutting tool is a bit loose, I can see this being lost, so will need a better clip to hold it secure.

The blade changing is very quick and tool-less

In use with the guide rail and extraction on, there is a little bit of dust, but not much. I also love the instant brake and have found it very safe in use. Plus if you turn the sound down, it looks like I’m using a laser….

And without dust extraction on

Now lets take a look at how square it cuts 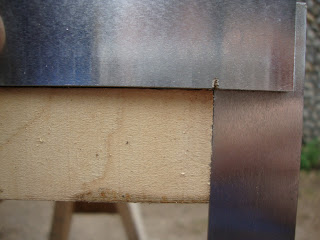 Is this jigsaw worth the money, for me yes. I have used many over the years and this is easily the best by far, it would be perfect, if not for the little niggles I have highlighted. That said it is a very well made tool and very accurate, I’m used to using jigsaws for roughing out work to then follow with other processes. This jigsaw is going to save me time cleaning up after, and in time also money. The strobe light is a very good feature, and helps with following the line. Its not a particularly loud machine in use, and the brake is a very good feature. Its variable speed, but I tend to use it on the A setting, it kind of idles when not in contact with the material, and as soon as it touches it, its full steam ahead. Putting the zero tolerance plates in is a bit unnerving, I used some pliers, but they really help minimise breakout. Now the money side of things I paid £464.40 which is twice as much as a comparable jigsaw…but this leaves them for dust, and is easily twice as good for the square cutting alone without all the extra options. On that note, I would recommend this jigsaw for sure, if you can justify the cost or you simply just want it.

I thought I would update this post  for a more informed view now, seeing as this Festool Carvex post gets hit the most.

Since I have had this power tool it has had some kind catastrophic electrical failure, that required a new motor and switch. This happened half way through a cut, where by blue smoke and sparks came out of the side of the tool, followed by a large bang, this happened on site scribe cutting 18 mm MDF while fitting some bookcases for a client. Luckily I had a spare jigsaw in the van so could carry on with the fit. This happened three days before Christmas, so I thought I would sort it out in the new year. I called Axminster power tools(where this tool was purchased) on the third of January and they collected it the very next day with a view for Festool UK to either fix or replace. They replaced the motor and switch after getting them sent over from Germany, and two weeks later I had my jigsaw back. The couple of disappointing things was…. I wasn’t offered a loan jigsaw for this two week period. Though I didn’t think to ask for one at this time, but it would of been nice to have been offered one none the less. Also why didn’t Festool UK not have the parts in stock, and why did this take two weeks. Overall I’m still happy with this machine now I have it back. I cannot fault Axminster in any of this because they picked it up the next day, and dropped it back off as soon as they received it from Festool UK.